Provincial government net debt up 89% in less than a decade

After a lull spanning the first decade of the 21st century, it seems that provincial government debt is again on the rise. 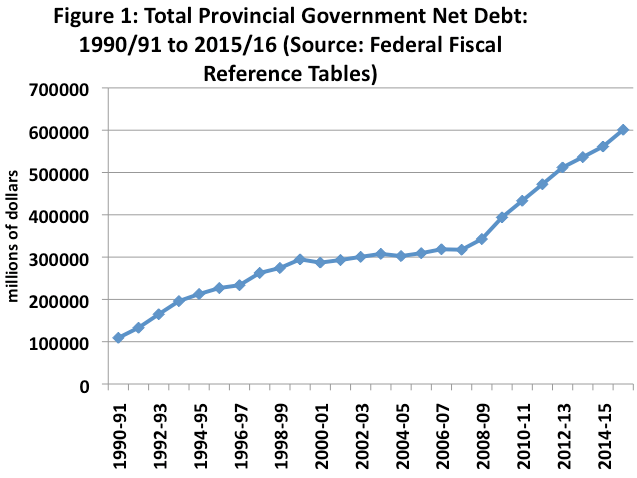 The Great Recession in 2009 was a factor in the increase in provincial government debt, but what’s interesting is the differential performance across Canada’s provinces.

The increases in net debt from 2007/08 to 2015/16 range from highs of 103 per cent and 95 per cent for Manitoba and Ontario to lows of 24 per cent and 25 per cent for Newfoundland & Labrador and Nova Scotia respectively. While Alberta did not have any net debt during this period, it also experienced deterioration in its net financial position with its net assets run down by almost 90 per cent.

The resulting long run picture is an interesting one, as the second chart illustrates. Some provinces have been running up their net debt faster than others, and as a result, have come to account for a larger share of provincial government net debt. 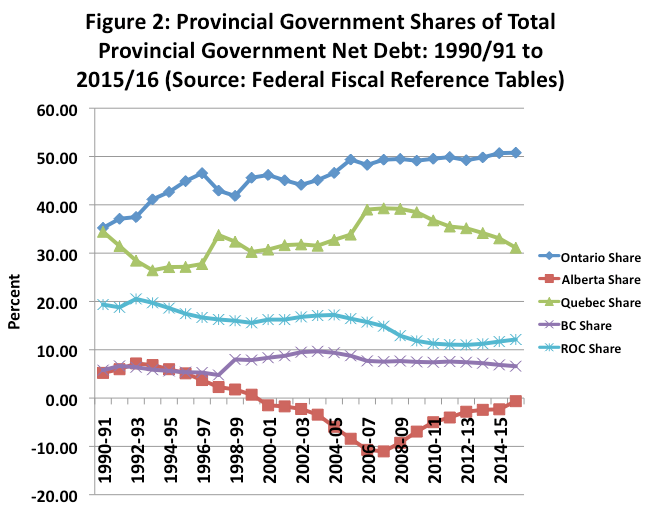 On the other hand, some provinces have slowed down their debt accumulation and their share of total net debt has declined. Over a 25-year period, Ontario has seen its share of total provincial net debt rise from 35 per cent—just below its population share—to 51 per cent.

British Columbia saw its share of debt peak at about 10 per cent in 2003/04 and has declined since to reach 7 per cent.

As for the rest of Canada—Saskatchewan, Manitoba, Nova Scotia, New Brunswick, Prince Edward Island and Newfoundland & Labrador—their combined share went from about 20 per cent to 12 per cent over this time period.

As a result, Ontario is now in the unique and unenviable position of accounting for more than half of provincial government net debt in Canada.