So much for lower taxes on Canada’s middle class

In the lead up to the federal election, the Liberals campaigned on cutting taxes for Canada’s middle class. Once elected, the Liberals did reduce the income tax rate on the second-lowest federal tax bracket from 22 to 20.5 per cent. However, the Liberals also implemented or announced a host of tax hikes that will more than wipe out the benefits of the income tax cut, leaving less money in the pocket of Canadians.

The latest tax increase announced is the payroll tax hike to finance the expansion of the Canada Pension Plan (CPP). Unfortunately, the impact that the CPP’s expansion will have on the disposable income of Canadians has not received any attention. Even though some Canadians will receive a benefit from the federal personal income tax rate cut, their net taxes will increase as the CPP expands.

Once fully implemented in 2025, the total CPP contribution rate (which is split notionally in half between employees and employers) will increase from the current rate of 9.9 per cent to 11.9 per cent of eligible earnings up to a maximum of $72,500. In addition, earnings between $72,500 and $82,700 will also be subject to the CPP tax, albeit at a lower total rate of 8 per cent.

Consider the tax implications for someone with taxable income of $54,900—the current maximum earnings threshold for CPP contributions. The income tax rate reduction will reduce this person’s income tax by $144 (see table below). However, if we assume the CPP changes are fully implemented this year, that person will pay an additional $514 in CPP taxes. And this doesn’t account for the additional CPP taxes paid by the employer on his behalf (another $514). 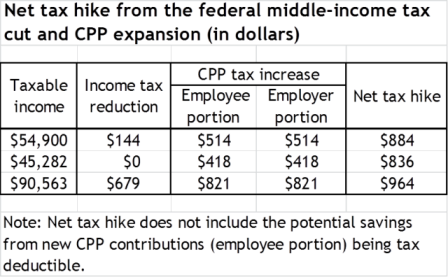 The federal government has said that additional contributions to the CPP will be tax-deductible for income tax purposes, so this worker would get some of their increased CPP contributions back by claiming a tax deduction. The net effect of these tax changes, however, is a tax hike—not a reduction.

Things look even worse for a Canadian with taxable income of $45,282—the lowest income level of the tax bracket where the Liberal tax cut applies. This person will receive no benefit whatsoever from the income tax reduction but will have to pay $418 in additional CPP contributions ($836 including employer contributions).

Even for Canadians earning more, the outlook for tax relief doesn’t look good. An individual with taxable income of $90,563—the income level at which they receive the maximum amount of personal income tax relief from the Liberal income tax rate cut—will save $679 in income taxes. But this person will pay an extra $821 in employee contributions to the CPP. Tax deductibility on new CPP contributions will provide this individual with some savings. But once you factor in the $821 in employer contributions (the cost of which will be passed on to the employee through slower wage growth and/or a reduction in other benefits), even this higher-income Canadian won’t receive a tax cut on balance.

Finally, the CPP tax increase alone is just one of many tax increases imposed by the new federal government on middle-income Canadians. The elimination of income splitting for couples with children, the cancellation of several widely used tax credits, and the reduction in annual TFSA contribution limits will potentially increase the tax burden for middle-income Canadians.

With all these tax hikes in mind, the net effect of recent tax changes is less money in the pockets of Canadians.