The newly-elected federal Liberals plan to raise taxes on the top one per cent of Canadian income-earners by raising the top federal marginal income tax rate from 29 per cent to 33 per cent on Canadians earning more than $200,000. Meanwhile, for those earning between $44,702 and $89,401, the rate will drop from 22 per cent to 20.5 per cent

But there’s no guarantee that raising taxes on the top one per cent will generate the necessary tax revenue to replace the revenue decline from middle-class incomes.

Those who recall the hump-shaped Laffer Curve relationship between tax rates and government revenue (see chart below) will note that raising tax rates increases revenues at lower tax rates—but as rates rise, a work disincentive effect kicks in, as well as a stronger tax-planning incentive that erodes revenues. 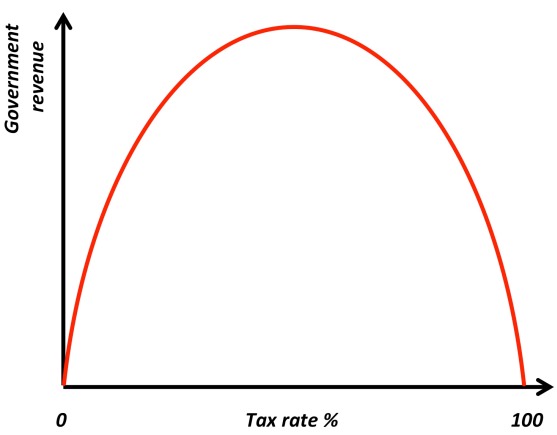 In other words, there’s a rate of taxation that maximizes revenues. At the seventh highest rate in the OECD, we are likely already at the revenue-maximizing rate range. Economist Jack Mintz has noted the average top personal income tax rate in Canada is already at 50.2 per cent and will rise to 54.2 per cent after the Trudeau tax increase.

Tax systems and tax rates are important ingredients in international economic competitiveness. It would be a shame if our recent progress on more internationally-competitive corporate tax rates was neutered by poorly thought out personal income tax changes that resulted in the loss of more entrepreneurial high-income earners while doing little for the personal income tax situation of the vast majority of Canadians.