Too many analyses misrepresent capital gains income and taxes

As demonstrated in an earlier commentary, capital gains taxes have been shown both domestically and internationally to be a costly way to raise revenue because they impose significant economic costs on economies that use them while not raising much revenue. Put simply, they’re a high-cost way for governments to raise revenue.

The following section is taken from a 2014 essay by Charles Lammam and Jason Clemens along with former intern Matthew Lo. It explains why the equity argument often used to justify increasing capital gains, which is likely to be incorporated if indeed the federal government makes the unfortunate decision to increase the tax rate, is quite incorrect.

In spite of the clear economic costs associated with capital gains taxation, its proponents tend to support it on equity grounds. It’s frequently claimed that only a small percentage of high-income earners realize capital gains, and the perceived unequal distribution of capital gains has in effect become the primary argument against capital gains tax reductions. As a Standing Senate Committee report summarized in 2000: 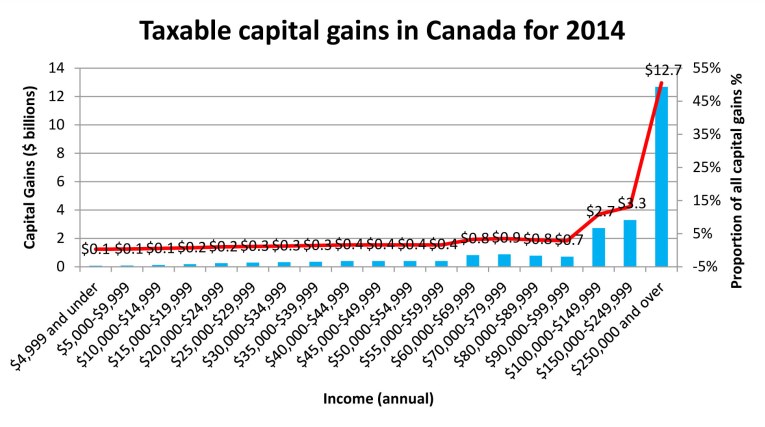 There are problems with relying on tax data to evaluate the distribution of capital gains, however. The first issue is that a considerable percentage of Canadians earn capital gains in Tax-Free Savings Accounts (TFSAs), Registered Retirement Savings Plans (RRSPs), Registered Pension Plans (RPPs), and in their primary residences, but these capital gains are either non-taxable or treated as regular income and therefore are not reflected in the tax data as capital gains. The point is that government policy already exempts capital gains from taxation for a large share of taxpayers in the name of encouraging investment, savings and homeownership.

The TFSA was created in 2009 and allows for Canadians to contribute up to $5,500 annually in a tax-free account. Any capital gains or dividends earned in a TFSA are non-taxable and therefore do not show up in taxable capital gains data. According to the Canada Revenue Agency, approximately 11.7 million Canadians hold TSFAs with a total value of $152 billion in assets. In 2014, about 23 per cent of the total value in TFSA contributions was made by individuals with incomes between $20,000 and $40,000, and more than 16 per cent was made by individuals earning less than $20,000. If capital gains incurred in TFSAs were accounted for, the distribution of capital gains would likely be much less concentrated than suggested by the current tax data.

This has implications for the income distribution of capital gains. In 2015, 6.0 million Canadians contributed to an RRSP and the value of contributions that year was $39.2 billion. In total, all assets held in individual RRSPs were valued at $1.1 trillion in 2015. It’s difficult to estimate the extent to which RRSPs holders are incurring capital gains in their respective accounts but it’s likely that some percentage is and these data are not reflected in taxable capital gains.

Finally, RPPs are employment-based pension plans that are based on employee and/or employer contributions. Any capital gains incurred in an RPP, like in RRSPs, is exempt from taxation until the income is distributed from the RRP, at which point the capital gains are taxed as regular income. This means that any capital gains incurred in RPPs are excluded from the tax data. This also likely has consequences for the income distribution of capital gains. According to Statistics Canada, 32 per cent of the labour force in Canada participated in some type of RPP in 2011. The total market value of all RPP assets in 2015 is $1.7 trillion.

By presenting income levels net any taxable capital gains, this method overstates the income distribution by pushing those with large one-time capital gains into higher income groups. But these gains are often atypical and can create a misleading picture about the income levels of those who incur capital gains. For instance, the owners of a small business may have lower incomes and reinvest earnings back into their business to build up a nest egg for retirement. It will appear that in the tax year such people sell their business and retire they are high-income earners, even though it’s a one-time spike in their personal income. Put simply, the lumpy nature of asset dispositions results in statistics on the incomes of those with capital gains that tend to overstate their wealth.

A similar analysis for 2010 finds a comparable distributional breakdown after accounting for pre- and post-taxable capital gain income.