Where red tape grows, growth in housing development may suffer

New housing is a key component to urban growth, and regulation that adds costs and slows housing development can restrain its supply.

A recent series of Fraser Institute studies presents new data measuring how regulation affects homebuilding. The chart below compares regulation and population growth across cities in the Greater Golden Horseshoe, home to two thirds of Ontario’s population including Greater Toronto and Hamilton. Where King Township has the most stringent residential land-use regulation, Burlington has the least. The data suggest that government regulations may limit growth in Canadian cities. 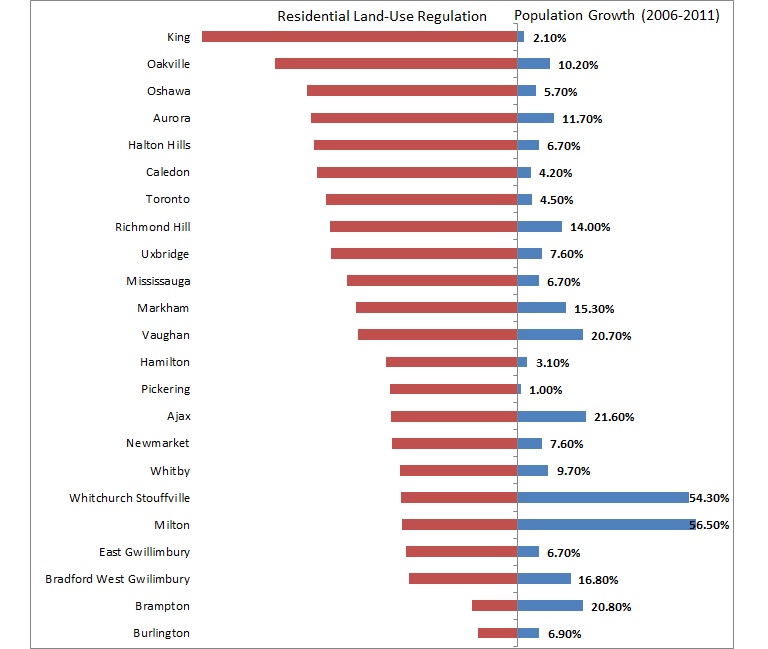 The most regulated cities tend to have lower population growth—a trend we also noticed in the Calgary-Edmonton Corridor and British Columbia’s Lower Mainland. Cities like Brampton and Milton not only share some of Canada’s largest jumps in population, but also rank better than most of their peers in terms of regulation. In other places, such as Oakville and Oshawa, regulations place a larger burden on builders and population growth has been slower.

In B.C.’s Lower Mainland, Burnaby and Vancouver offer access to the same labour market—more than a third of Burnaby commuters are Vancouver bound—but very different access to new homebuilding. This sort of stark distinction exists in all three regions we studied. When one city in a region is closed off to new building, newcomers are left with less choice in places to live. These constraints can lead to higher house prices in the short term, and can stymie regional employment growth in the long term.

The data here do not definitively demonstrate that differences in regulation decide which cities grow; the exact location of jobs and people’s tastes ultimately play a role. Further, it may be argued that planning departments in smaller cities are ill-equipped to deal with a flood of development applications.