British Columbia’s provincial government has begun releasing long-awaited data on foreign nationals purchasing real estate in B.C. While this topic has gained much attention as a possible source of housing price inflation, the government found that foreign nationals only accounted for 3 per cent of provincial sales and 5 per cent in the Lower Mainland last month.

A group of buyers this size might affect prices in small niches of Vancouver’s market, but broader market forces such as low interest rates and a tight housing supply—which is affected by regulation, as demonstrated in a new Fraser Institute study—are more likely to drive prices in a region as large as Vancouver.

To put foreign ownership in perspective, the number of foreign buyers in the Lower Mainland during this period was 260 out of 5,118. This is roughly comparable to the number of units in a single residential tower—the type of project that often meets opposition in Vancouver. Moreover, foreign buyers appear more likely to purchase high-end homes (averaging $1.16 million per home). This might well drive up prices in certain neighbourhoods, such as Vancouver’s West Side.

However, demand in high end neighbourhoods doesn’t have to cause price increases for the entire Lower Mainland. If new housing supply can adequately respond to spillovers in demand, there’s no reason for bidding wars in middle-class neighbourhoods.

What matters more than how much foreign buyers are willing to spend on luxury homes is how many housing units are available in the metropolitan area—something municipalities have some control over. Our research on land-use regulation and housing supply found that barriers to obtaining building permits, like long and uncertain approval timelines, can significantly reduce the number of new builds. This is especially the case in central neighbourhoods such as Vancouver’s West Side, which are in demand and would have likely seen more supply if regulations were relaxed. 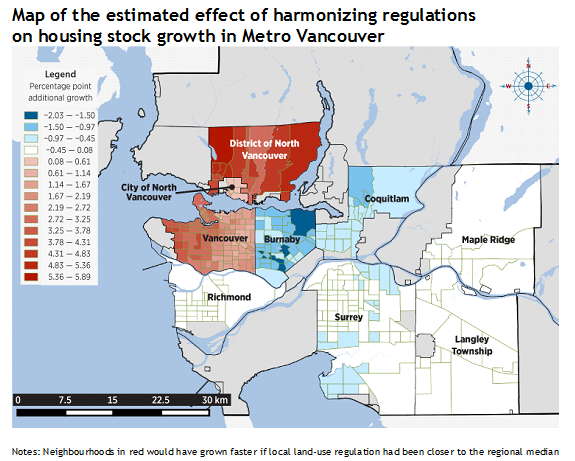 The B.C. government’s data is a first step amid wider efforts to better understand the demand dynamics of the housing market. Interest rates on mortgages are at their lowest in decades, and the Lower Mainland’s beautiful coastal location, lifestyle and mild climate help make the region desirable for citizens and non-citizens alike.

As tempting as focusing on foreign ownership might be to some, the relatively small number suggests there are other factors at play in the rapid appreciation of housing values in the Lower Mainland. Rather than worrying about a small component of the demand for housing, the province and municipalities should focus on tackling barriers that reduce housing supply.