Recently, Republican Presidential nominee Donald Trump made headlines in Michigan by claiming that the state’s “manufacturing sector is a disaster,” and predicting that a great deal of the automobile manufacturing industry would relocate to Mexico “very, very soon.”

It’s important to correct Mr. Trump on this point, because his statement contributed to a false narrative holding that due to globalization and free trade, advanced economies will have no choice but to lose manufacturing to developing countries with lower labour costs.

While it’s true that cheaper labour is an advantage in developing countries, it’s important to recognize higher wages in more affluent countries such as Canada and the United States are partly the result of higher productivity as workers take advantage of better training and equipment. In short, developed countries have advantages, too.

This fact should be kept in mind whenever a politician or commentator attributes the relative decline of the manufacturing sector in Ontario in recent years to uncontrollable global forces (such as freer trade).

Ontario’s manufacturing sector has struggled in recent years (actually averaging negative annual employment growth of 0.5 per cent from 2011 to 2014), but in light of Michigan’s manufacturing revival, attributing these struggles solely to global forces outside our control is, at best, an oversimplification. 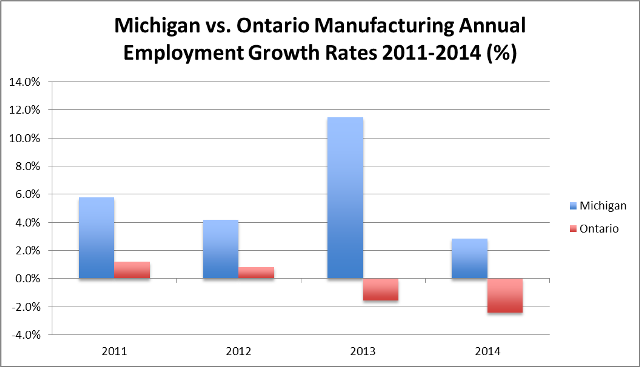 There are many contributing factors to Michigan’s economic revival, but it’s important to recognize that the state’s turnaround has happened simultaneously with a remarkable period of public policy transformation. Since 2011, Michigan has been in the process of passing and implementing an ambitious economic reform program designed to create jobs and stimulate growth.

The reforms include business tax simplification and reduction, disciplined government spending restraint, and the passage of “right to work” legislation that makes it illegal for workers to be required to financially support a union as a condition of employment.

Notwithstanding an encouraging uptick in recent months, there’s no doubt that Ontario’s manufacturing sector has not recovered from the 2009 recession as robustly as one would hope. It would be a mistake, however, to accept this trajectory as an inevitable fact of economic life. The reality is that some jurisdictions, such as Michigan, have seen their manufacturing sectors boom in recent years.

That’s why comments like Mr. Trump’s that downplay the success of Michigan and imply that manufacturing is on the decline everywhere in Canada and the United States are unhelpful, in that they draw attention away from the fact that some manufacturing jurisdictions that have pursued pro-growth policy reform have actually fared quite well in recent years.