A recent study co-authored by a B.C. MLA and a city planner has once again stoked anxiety over the impact of foreign homebuyers on housing prices in B.C.’s Lower Mainland. The headlines noted that 70 per cent of detached homes listed in Vancouver’s West Side went to Mainland Chinese purchasers over a six-month period. However, it’s unclear that 70 per cent of 172 homes represent a significant problem in a metro area of 2.5 million residents. 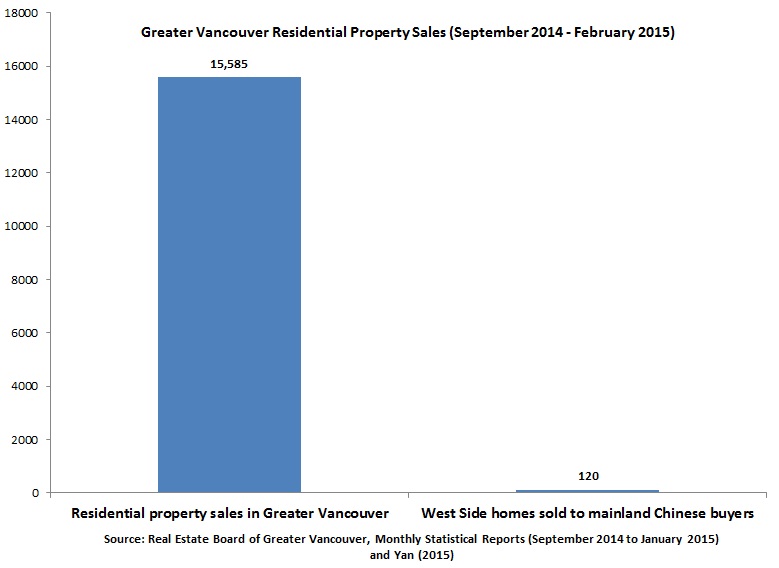 The study’s 120 homes sold to ethnic Chinese foreign buyers represent 0.77 per cent of all home sales in the Greater Vancouver Area, making it difficult to pull conclusions about the region’s housing market as a whole. The researchers are aware of this, and point out that their work would benefit from broadening its scope across a larger market. It is unclear that 120 homes, concentrated in a single part of Vancouver, say very much about the rest of the region’s housing market.

But rather than focusing exclusively on the sources of housing demand, local policymakers should consider addressing barriers to increasing the housing supply. For example, regulatory barriers to residential development add more than $37,000 to the cost of building a new home in the City of Vancouver, according to a recent Fraser Institute study.

The study also found that it takes approximately 15 months to receive approval for a typical residential development in Vancouver, and that the uncertainty of this timeline further deters development. These types of barriers were found to be concentrated in the North Shore cities and Vancouver proper, which can look to cities such as Burnaby for examples of a less costly system.

Removing artificial barriers to construction in the Greater Vancouver area could allow the market to supply strong housing demand. Ensuring cities have adequate regulations that do not unduly add time and cost to home construction would likely be a more productive avenue than worrying about one particular source of housing demand.