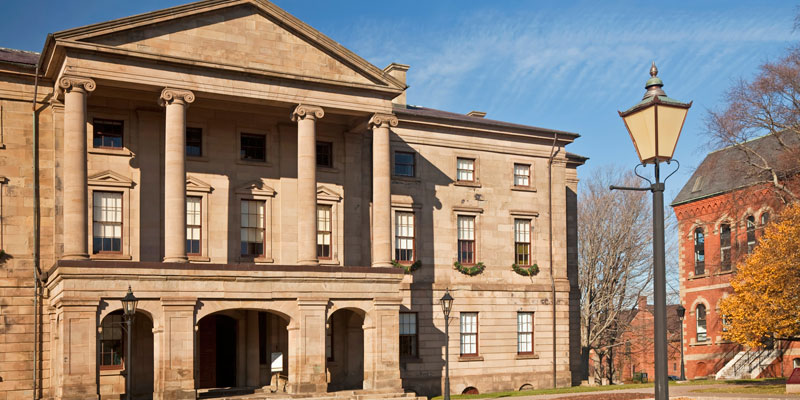 In the coming weeks, the Prince Edward Island government will prepare its operating budget for 2020/21. Prior to the COVID-recession, the King government and its predecessor had success in balancing the budget and establishing operating surpluses in recent years. This represented important progress for the province after several years of fiscal mismanagement and deficit-spending.

However, COVID-19 will impose immediate financial strain on P.E.I. and amplify the fiscal challenges it faces in the long-term. In this blog post we estimate the amount of net debt—total liabilities minus financial assets—P.E.I. could accumulate in 2020/21 based on an increase in COVID-related spending and declining revenues.

Around this time last year, the King government had projected it would run a small operating surplus of $7.4 million in 2020/21. But the province was still expected to add debt despite a balanced budget, because it separates annual spending (the operating budget) from long-term spending on items such as new schools and highways (the capital budget). Budget 2019 projected that net debt in P.E.I. would grow slightly from $2.2 billion in 2019/20 to $2.3 billion in 2020/21. Provincial net debt (as a share of the economy) was anticipated to remain relatively constant at 29.9 per cent in 2020/21.

Obviously, as noted in a previous post, circumstances have changed. The COVID-19 crisis has precipitated a deep recession, with forecasters such as RBC predicting a pronounced contraction in the economy. This contraction will have a major impact on P.E.I. government finances. In addition to the shrinking economy, P.E.I.’s debt will rise more than anticipated with the result being a sharp increase in its debt-to-GDP ratio this year.

Part 1 of this blog series explained that the P.E.I. government now expects to run a $175 million deficit this year, which would be the largest deficit on record. However, data from the federal Parliamentary Budget Officer (PBO) national report suggests this could understate the province’s deficit. In fact, our projections estimate that P.E.I. could run a historically large $320 million operating deficit in 2020/21.

Of course, a large deficit will significantly impact the province’s debt situation. To illustrate the rise in net debt, we will assume that the King government maintains the same capital spending plan from its latest estimates in November 2019. Under this approach, P.E.I.’s net debt is projected to increase from roughly $2.2 billion in 2019/20 to more than $2.6 billion this year. Put differently, the province could see its net debt rise 17.0 per cent in 2020/21.

But the fiscal challenge is only exacerbated once we consider the contraction in the economy. Projections from RBC envision that nominal GDP in the province could fall by 3.2 per cent, or approximately $239 million this year.

The resulting effect on provincial finances will be substantial. The province’s debt-to-GDP ratio (a common measure of a province’s ability to pay its debt) would reach 36.6 per cent in this scenario, which is slightly higher than the 36.0 per cent projection from RBC. This means that debt relative to the size of the provincial economy could climb more than six percentage points higher than the 2020/21 estimates provided in last year’s operating budget. 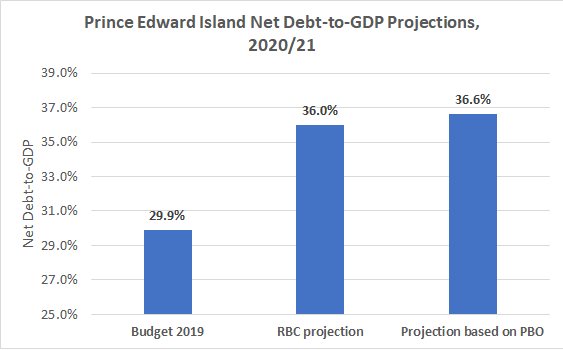 Although this estimate is simply a projection and things could turn out better than forecasted, it’s important to recognize that P.E.I. has an aging population and was facing medium- to long-term fiscal challenges before the pandemic. The COVID crisis will only exert further pressure on provincial finances. This is worrisome because growing government debt can have negative effects on economic growth and diverts millions of dollars away from important public priorities such as health care, education, and tax relief. Islanders will also face higher taxes in the future to pay off the resulting interest payments.

P.E.I.’s fiscal situation is dramatically worse than the King government expected just a few months ago and some of the progress that had been made in recent years has been wiped out. The provincial government must now recognize the scale of its fiscal challenges and begin formulating a plan to tackle the resulting debt load sooner rather than later. As the province emerges from the COVID-19 crisis, a stable fiscal plan will be a key part of the recovery.