Share of students enrolled in Quebec francophone schools has declined

Choosing where a child is educated is one of the most important decisions Canadian parents can make. Depending on geographical location, families may be able to choose a public school in either official language, a separate Catholic school, an independent school, a charter school, or decide to educate their children themselves through homeschooling.

While the majority of students are still educated in public schools in the dominant language of their area (French in Quebec, English in the other nine provinces), more and more families are looking at alternatives. 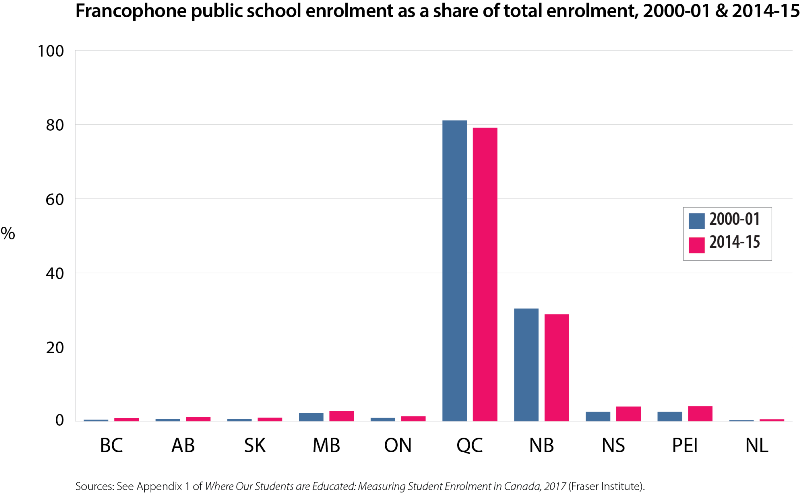 A total of 79.1 per cent of Quebec students attended a francophone public school in 2014-15.

Outside of Quebec, enrolment in francophone public schools ranges from a low of 0.5 per cent in Newfoundland and Labrador to a high of 28.8 per cent in New Brunswick—Canada’s only officially bilingual province.

What’s most interesting is that in eight out of 10 provinces, enrolment in francophone schools, measured as a share of total enrolment, has increased between 2000-01 and 2014-15. Quebec, with francophone schools as their primary education system, and bilingual New Brunswick with the second largest French-language enrolment, are the only two provinces that have seen a decline.

Bilingual families have an additional option for the education of their children compared to families who only speak one of the two official languages (although it should be noted that Quebec has restrictions on who is eligible to attend an anglophone school). In eight out of 10 provinces, French-speaking families are increasingly taking advantage of this option and sending their children to francophone schools.