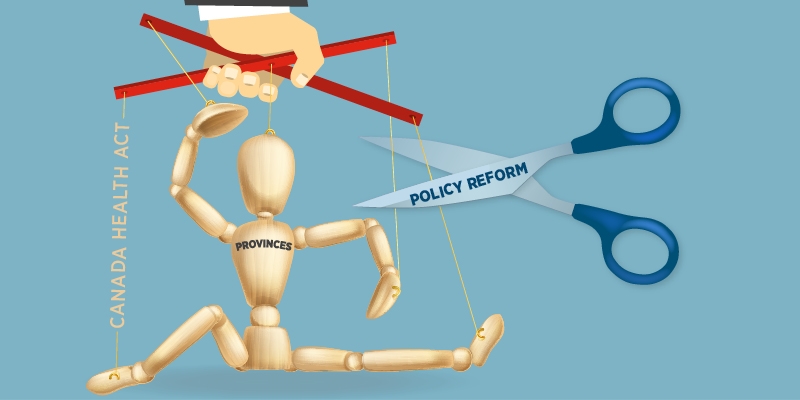 Despite high levels of public spending, Canada’s health-care system consistently performs more poorly than a number of peer jurisdictions with universal health-care systems. Governments across the country must address this policy challenge in a context of constrained resources, as the federal government and a number of provinces currently face increasing debt loads and other significant fiscal challenges. This paper considers the extent to which policy lessons from Canada’s past can help governments in Canada address the dual challenges of an underperforming health-care system and growing fiscal pressure on governments. Specifically, it considers the extent to which Canada’s experience with reform of federal-provincial transfers and welfare during the 1990s provides lessons that can be applied to the process of reforming Canadian health care.

During the 1990s, the federal government transformed its approach to providing financial assistance to the provinces to support their welfare and social assistance programs. Specifically, the federal government reduced transfers to the provinces but, in exchange, removed a number of “strings” previously been attached to federal funding that prohibited certain types of policy reform. For example, the provinces were permitted to create work requirements for receipt of welfare payments, which previously would have triggered the withholding of federal transfers.

The reform of federal transfers to the provinces led immediately to a wave of policy innovation and reform at the provincial level, as governments across the country pursued various policy paths designed to improve their welfare programs, create solutions that actually addressed local problems, and reduce program costs. Many of these reforms had the intended effects, as there was a marked decline in welfare dependency and government spending on public assistance in subsequent years.

However, no similar wave of policy innovation occurred following the 1990s transfer reforms in Canadian health care. This is largely because the government maintained the various “strings” that were attached to health spending transfers and, specifically, the terms and conditions of the Canada Health Act. As a result, health-care policy in the Canadian provinces has since the 1990s generally been largely characterized by policy inertia while spending on health care has increased considerably.

Canada’s experience with welfare reform provides a model with important implications for how to begin reforming and improving Canadian health care. By reducing transfers in real terms while amending specific provisions of the Canada Health Act that inhibit reform, the federal government can partially address the fiscal challenges it faces today while providing provinces with the freedom to innovate and pursue policy reforms to improve their health-care systems.

Such changes would allow for greater experimentation by each province as they seek out what policy arrangements have the best possibility of improving health-care performance. For instance, provinces would be well served to examine the introduction of cost-sharing arrangements (co-insurance, deductibles, and co-payments) used in most other universal health-care countries to ensure more efficient use of the health-care system by patients. Provinces might also look at removing regulations that currently prevent a greater supply of needed health-care professionals and investment within the health-care sector.

It is uncertain exactly what reforms different provinces would choose and this paper does not weigh the advantages and risks of specific reform options in detail. Instead, based on Canada’s experience with welfare reform, this paper recommends a crucial change, the devolvement of decision--making powers to the provinces, with the federal government permitting each province maximum flexibility (within a portable and universal system) to provide and regulate health-care provision as they see fit.