High and uncompetitive rates can also make it difficult for a jurisdiction to attract and retain highly-skilled workers such as entrepreneurs, business professionals, engineers and scientists. While governments across Canada have paid lip service to the importance of having a skilled work force, a more competitive personal income tax system can help achieve this objective.

This problem is hardly unique to Ontario. The combined federal and provincial top rate in most provinces is over 50 per cent. And this doesn’t factor in all other taxes (such as sales taxes) that have to be paid if the extra income is consumed. Losing such a large portion of labour income to taxes discourages people from earning more.

By international standards, and using Ontario as our representative province, Canada has one of the highest top personal income tax rates in the industrialized world (see chart below). In fact, Canada has the highest top tax rate among English-speaking countries including the United States and United Kingdom. 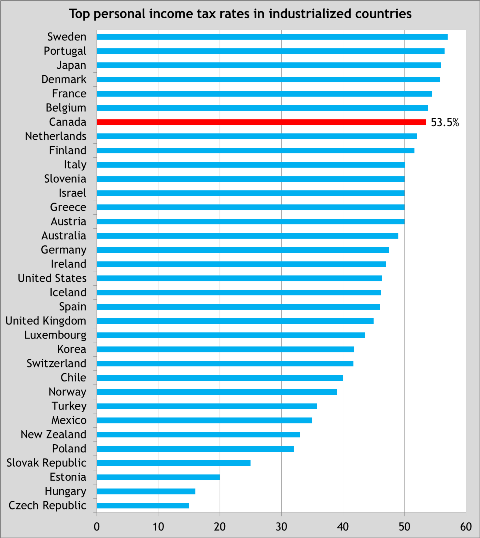 Canada is at a stark competitive disadvantage when it comes to personal tax rates on highly skilled and educated workers. This is a hindrance to greater economic prosperity and an issue that deserves more attention in public discourse. It’s a positive sign that tax reform is making its way onto the agenda.