The Internet is abuzz over a recent report by the Parliamentary Budget Office (PBO) that shines some light on the potential impact of the federal carbon tax plan on Canada’s economy.

Specifically, the report shows that the carbon price the federal government is mandating all provinces to impose on businesses and residents in the years ahead could create substantial headwinds for the Canadian economy.

For example, under one set of assumptions in the PBO analysis, where the provincial governments simply rebate all carbon price revenue, provincial cooperation with the federal floor would reduce the size of the Canadian economy to the tune of 0.5 per cent in 2020.

This is, in short, a big effect.

Specifically, it represents a $10 billion reduction in economic activity that year alone. The chart below from the PBO report starkly illustrates the negative economic consequences of this policy mix. 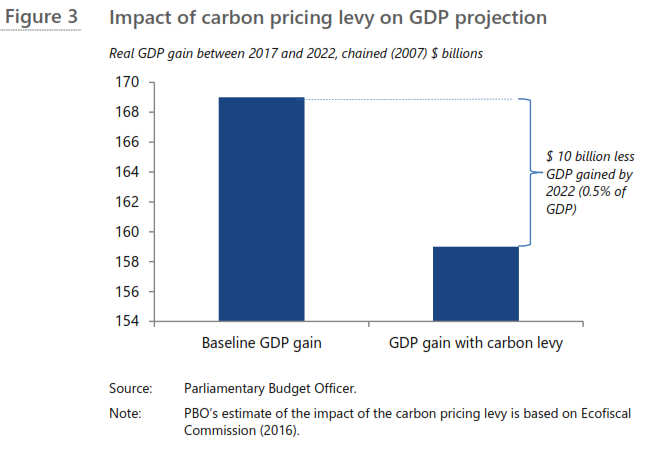 The report also suggests that the cost of compliance with the federal carbon floor could be mitigated if the provinces choose more economically-efficient revenue recycling tools—such as reducing economically harmful taxes instead of issuing lump-sum household rebates or environmental spending programs.

But based on experience, it’s overwhelmingly likely that governments will not choose the “lowest-cost” revenue recycling options or use all carbon tax revenues to reduce personal or corporate income taxes. In fact, if governments continue to enact carbon-pricing the way they are now, the PBO is likely underestimating the economic costs of Ottawa’s carbon-pricing requirements.

The belief that governments will not adapt the “textbook” carbon tax (which is revenue neutral, offsets regulations, and does not intervene in energy markets or technology selection) is not skepticism or cynicism—it’s historic fact.

No jurisdiction in Canada has implemented the academically-ideal carbon tax that is revenue neutral, replaces regulations, is based on a properly deflated social cost of carbon, or eschews governmental dictates in energy markets.

For example, Alberta is spending some of its carbon tax revenue on various environmental spending initiatives and also plans to apply carbon-pricing revenue against the province’s large budget deficit.

British Columbia came close to embracing the “lowest economic cost” approach to carbon tax revenue recycling—during the first several years of implementation, the money was given back to British Columbians and businesses through individual and corporate tax reductions. However, revenue diversions to boutique tax credits began in only the second year of the tax regime, and the government began to use creative accounting to get around the spirit of true revenue neutrality. In the most recent budget, the new B.C. government changed the rules so that increases in the carbon tax can now be spent on programming rather than offset by reductions in other taxes.

Clearly, if provincial governments continue to use carbon tax revenues to fund household rebates, environmental spending, distort energy markets and spend on other options that do little to mitigate the economic cost of carbon taxation, the new PBO report demonstrates that the economic cost of the entire enterprise could be punishingly high.

Indeed, the issue seems even more worrisome given Canada’s long-term economic growth rate is expected to be only approximately 2 per cent. If these low-growth projections hold, further policy changes that cost the Canadian economy half a per cent of GDP annually would obviously represent a meaningful economic headwind.

Canada’s federal government, and several provincial governments, have committed to a steadily escalating carbon tax, reaching $50 per tonne in 2022. This week’s PBO report suggests the costs could be very high, particularly if the provinces stay true to their historical record of failing to use carbon revenue to offset tax reductions that would reduce those costs.